Pulse is a heartbeat monitor; it connects with your smart band and fetches your pulse in real-time to display it on a dashboard. I created this for my major submission in the final semester. This blog is to journal the steps and decisions taken while creating this project and I will try to explain things in detail, but somethings might be edgy and unclear, and that is because I am writing this after completing the project, so can’t recall all the stuff.

If you are here for just the design process, you can directly jump to that part.

This project was initially conceptualized during a hackathon(Ultrahack Delhi - 2019). I had this very raw idea of analysing health data and predicting diseases, and after teaming with 4 of my friends we came up with this idea of using the smart band(Miband 3) and ECG sensor to get data and then analyse it and together we created curie. It worked great, the exciting thing is, while presenting it, I was wearing the band and judges could see my heartbeat in realtime on a chart! However, we didn’t win, but it was a pleasant experience.

A year later, in my final semester, I needed to create a project for submission; that’s when I decided to take another look at the idea and recreate it with a more robust and practical application. That’s how pulse was created.

As I see it, in the future, Imagine a subscription service provided by your hospitals, with a partnership with other companies they will give you a smart bands/watch or other wearable devices, and they will then privately and securely connect with that device to analyse your health vitals in realtime, to predict the health problems you might have in your lifetime.

Or, think of an application to help athletes to tap into their health insights and help them in making smart and informed health decisions, by recommending health diets or fitness routines etc. These are just two examples. Otherwise, there are many many applications for it.

Future needs cheap and advanced health analysis, something that can be easily and rapidly implemented even in the poorest countries. It’s not like it’s not already happening; it is, but this project is just an experiment to discover and create one of the ways to implement it.

🔰 Goal: Initially, I wanted to write the application in just one language(Go) and use the binary to distribute it via a snap or use another medium.

To do so, I also need to compile the frontend files in the binary, and for the I used pkger, it was a little tricky to configure it, but after trying out for few days, I was able to generate pkger.go file which contained the frontend files.

The second thing I had to do was find a way to connect to Bluetooth devices in Go, and I came across a few options and decided to go with Paypal/gatt package. Even though this package wasn’t maintained for a long time, it was still the most starred and forked package from other options.

However, now when I think about it, it wasn’t the right package to pick, I was able to discover and connect to devices, but I wasn’t able to pass data or fetch services from the Bluetooth device, even after spending countless hours I wasn’t able to figure it out, and if your have to spend days to do a very simple task using a library then probably it’s a wrong library you are using.

🔰 Goal: Use another library to connect to the Miband and embed it in Go.

Since Paypal/gatt didn’t work for me; I decided to use yogeshojha/MiBand3 to connect and work with Mibands. My goal was to have just one binary, so I wanted to compile this program with go as I did with frontend. I tried many things to do that:

In the end, I decided to create a separate service for Miband3 and communicate with the pulse command using gRPC. It does break my initial goal of creating a single binary for it, but it works and probably is the best solution for the given problem that could be created in a limited time. Also note, the goal of creating the binary was to make it distributable, so this service is designed in a way that you can build a .whl file for it and install it on your system. The ideal solution will be to make the gatt package working in Go and rewrite the Miband3 in Go, which doesn’t just involve reinventing the wheel but also delays the solution.

🔰 Goal: All the part of the project are individually working, and now I had to glue them up.

Since Miband3 is handled by mibandPulse service/command, I could run this service on-demand using the exec package in Go, but after reading the docs, it turns out, it doesn’t keep the programme running and terminates it after the first run. So, this option was out.

The more significant issue I encountered was when running the project together; I discovered that when the pulse command was running and using Paypal/gatt package, the mibandPulse command wasn’t able to connect or use Bluetooth, and that’s because Paypal/gatt only runs as a sudo by design and takes over the control of Bluetooth.

There were two options I could see were,

I decided to go with the second option, as that was fast and required less efforts then rewriting the whole code again. I created pulseExplorer service, which runs for 8 seconds and stream list of Bluetooth devices, this stream is used by Pulse command to store the list in its state, which is later sent to the users on the frontend, and when users click supported listed device, the request is sent to mibandPulse service to connect and fetch data from that respective device. 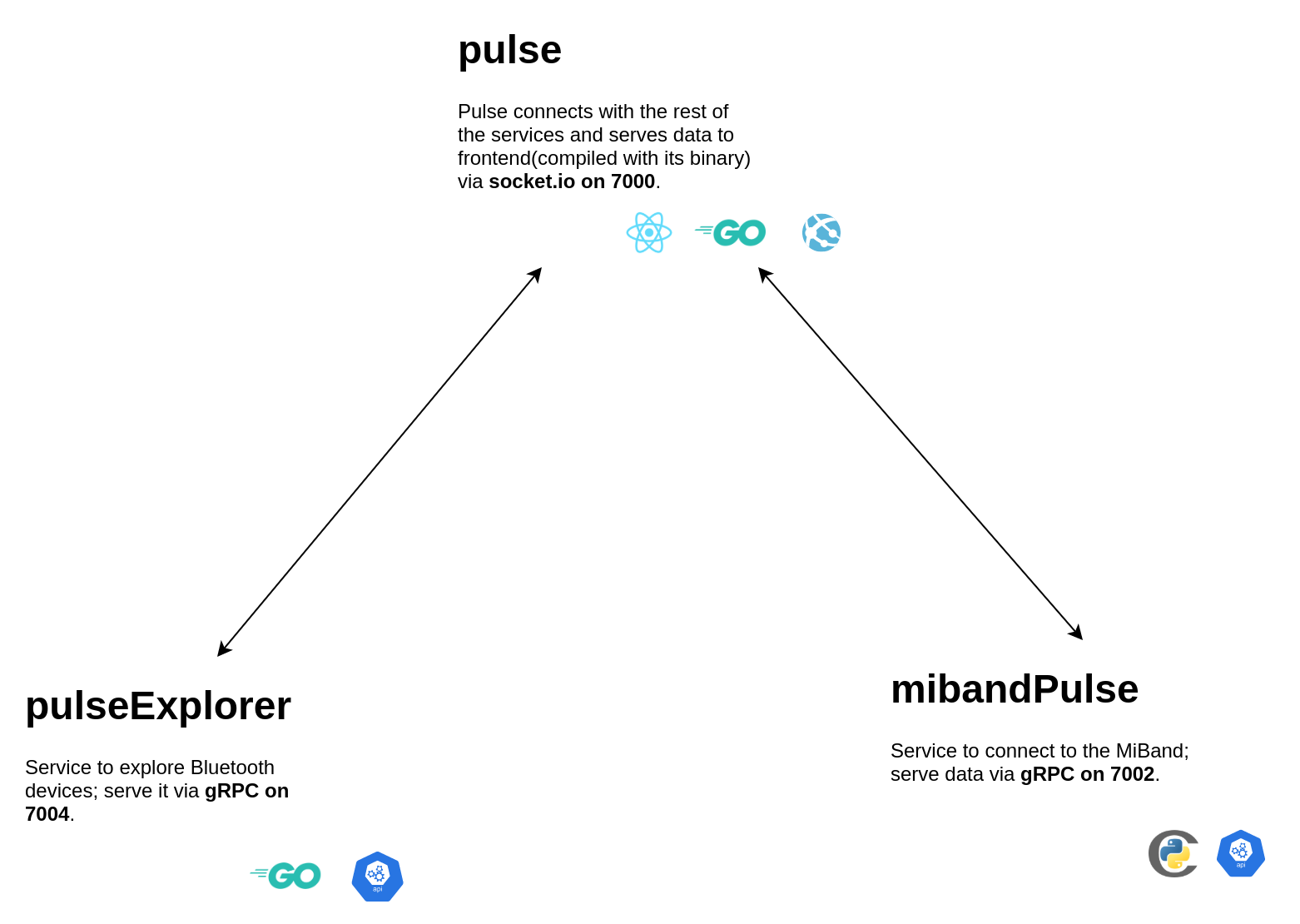 In my opinion, a vital thing to keep in mind when writing code is, to ask yourself that will it run 10 or 20 years from now, and make the decision based on this goal.

Also, read the take away at the end of each phase.

This project is more like an experiment or a prototype. So if there are bugs or better coding practices, I will appreciate it if you can politely point them out via Github issues. Also, if you like this project or my other projects, you can follow me on Twitter or Github and also maybe give this project a star. ☺️ ⭐️